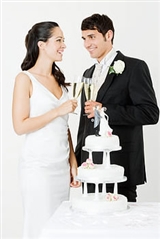 Everyone has a wedding cake at their reception, but many do not realize the history of the wedding cake and its importance today.

As far back as the Roman Empire, wedding cakes were created. However, the wedding cake during that time era was a bit different than the fancy cakes we see today and the cakes were not eaten by guests attending the festivities. A loaf of barley bread was used fro the nuptials. The groom would a portion of the bread and break the rest of the bread over the brides head. This was symbolic of breaking the bride’s state of virginity and the groom’s dominance over the bride.

Medieval England saw a different tradition. Instead of a wedding cake, in front of the newlyweds home a pile of small sweet buns were stacked up. The couple had to kiss over the pile. If they were successful, it was a sign they would have many children.

From the 17th century until the 19th century, cakes were used at all; instead, the bride pie was used most often. The pie was similar to mincemeat pie and hidden instead was a glass ring. The lady that found the ring in her serving was the next to be married.

The 19th century brought us the beginning of the wedding cake. At first, the cake was nothing more than a single-tiered plum cake. This evolved into the beautiful fancy wedding cakes we see today. Today, the top tier of the wedding cake is frozen by the happy couple to enjoy on their first anniversary.

Wedding cakes are often white, even though you will find variations. White has always been associated with purity, thus the reason for white at weddings including the cake. At one time, a traditional that was found around the world was the groom’s cake. This cake was one that was prepared for the guests attending the ceremony. This cake was not white at all but in most cases was dark created from fruits to help preserve the cake for the guests to enjoy later.

Today, the first thing that most people see as they walk into the reception hall is the large tiered wedding cake with a bride and groom on top. Today, the cake can be a large variety of different things from the traditional white cake to chocolate cake to all kinds of shapes from the Eiffel tower to a castle. The wedding cake can be decorated to fit the theme, the colors, or the desires of the couple.

No matter the traditions that have brought us these delectable wedding cakes, today, a wedding cake must be present at the reception. Today, the fancy cakes can be several tiers, cupcakes created for one large wedding cake, sheet cakes, and more. Talking with a chef at the catering hall will give you ideas of the types of wedding cakes you may wish to have for your wedding. The chef may be able to create your wedding cake or will know of the best place to turn for help with creating the most beautiful wedding cake for your special day.